This has been my favorite Whistler festival since the very first year. The concept, created by Doug Perry and the gang back in the 90’s, was to invite ski and snowboard industry staff and fanatics from all over North America. You see, Whistler had tons of snow… and empty hotel rooms… and a great party scene… and we wanted to share it with anyone that mattered in the ski world.

Looking back, hosting a big snow sports event in April was a very brave move. But hey, what did we have to loose?!

Without sounding like an old Whistler relic, here are my top 3 things you need to know about WSSF 2014:

Buy a beer at the Longhorn Apres by way of thanks

The cornerstone big-name ski events of the annual World Ski and Snowboard Festival will be saved from the chopping block this year thanks to a major cash injection from a local businessman. Joey Gibbons, owner of several Whistler bars, has stepped up to the plate at the 11th hour with a cheque for $50,000.… 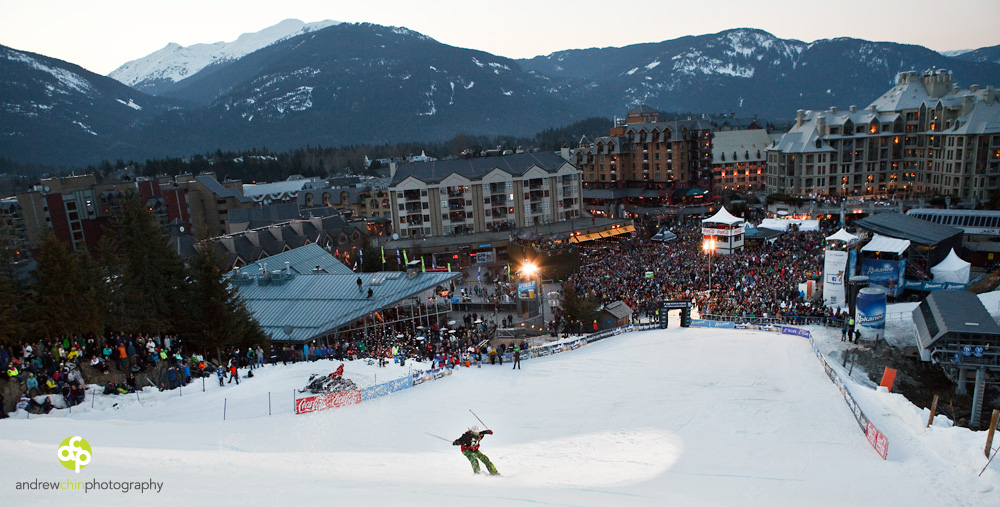 WSSF Tickets are on sale… and they sell out fast

Tickets are on sale for the biggest annual gathering of winter sports, music, arts and culture in North America, the World Ski and Snowboard Festival.

WSSF motto: “Party in April. Sleep in May.”

Free Music Concerts – Music is happening in Whistler all week long. The 2014 line-up has started to roll in! Cut Chemist, Shapeshifter, The Original Wailers, The Planet Smashers and Bombino have been confirmed…

Silent Disco is Back! Here’s how it works. Plug in your ear phones (supplied to you at the door), choose from one of three LIVE DJ’s spinning, and you got it… dance the night away! Everyone will get a white t-shirt and glow marker for fun in the black lights. Buy tickets early because this notoriously legendary event will sell out.

OLYMPUS 72 Hour Filmmarker Showdown – The ultimate filmmaker challenge – filmmakers are tasked to shoot, edit and produce a 3-5 minute short film within 100km of Whistler, over a course of 72 hours.

Big Air – For 15 years, Saturday night during the WSSF has always been reserved for the biggest events, the biggest crowds and the most energy. On April 20th, max-capacity crowds will witness the world’s best snowboarders compete on a huge 70 foot table jump for $25,000.

This is just a snapshot of the events happening during the 10 days WSSF 2014 takes over the town. So be sure to check out the full schedule, to determine what events you want to be a part of. With spring skiing conditions (skiing in your t-shirt) and music and roaring crowds you can hear from the peaks, there’s no better time to ride Whistler and Blackcomb, then during the WSSF.

WSSF Volunteers are needed and appreciated… and cool

Volunteers are wanted for events from the photo, film and art galas in the Whistler Conference Centre, to the Outdoor Concert Series at the Main Stage in Skiers Plaza. Volunteers are also needed for on-mountain ski and snowboard events.

Those interested can visit www.wssf.com/volunteering. If you’re not sure, check out this WSSF video for some festival motivation…

Find a Great Place to Stay for WSSF Whistler

Perfect accommodation for WSSF. Many homes feature private hot tubs and secure ski, snowboard, bike and equipment storage. Cheap or luxury, studios to mansions… for way less than a hotel.

You can also order discount Whistler lift tickets and have them delivered to your Whistler vacation rental when you arrive in resort.

ResortAc.com offers a simple, fast and convenient way to search about 100 Whistler accommodations for rent by owner. Stay in a Whistler vacation rental that suits your budget while providing all the amenities you want.