This time of year, bears throughout the province are out and about searching and competing for available food sources while gearing up for the winter months. 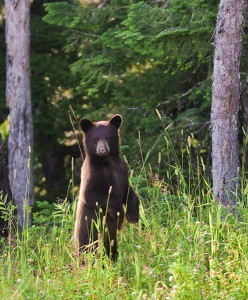 As we move into late summer and early fall, human-bear conflicts will be on the rise. In Pique Newsmagazine Sept 8, 2015 article, Michael Allen, who’s been studying the region’s bears for over two decades, said that Whistler’s alpine berry crop – a vital food source for local bears as they fatten up for winter – has virtually disappeared after a hot, dry summer.

“The simplest way to put it is that the bears ate the fall crop in the summer,” Allen explained.

Knowing how to avoid bears and what to do when you see one will help keep you and the bears safe. Here are some key things you can do to help keep bears and people safe. 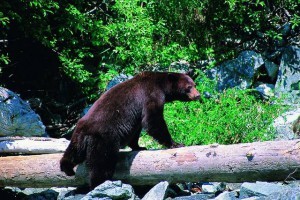 Bear-watching tours provide the opportunity to watch the bears in their natural environment, while getting to know their personalities and even their names.

These two black bears explore people’s backyards for food – be it garbage, berries or grass. While they’re at it, they take time to have some fun!

Getting into a sketchy mountain bike / bear encounter at whistler.

This hungry bear was walking in the village and smelled some good food behind a door. so what do you do? you ring the door bell!

Learn More about Bear Behaviour, check out the Alberta Bear Smart video: Think like a Bear! 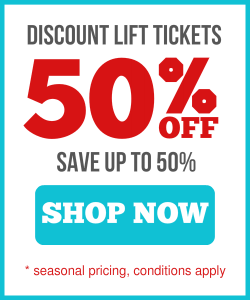 Get a Package Deal, Without Buying a “Package”.

Find the best deal for multi-day lift tickets to go with your Whistler vacation rentals.

Whistler Vacation Rental Map & Guide :: Shows Whistler’s best ski in ski out & golf course locations, along with all the condo building names. Find the best locations before you make your reservations.