Whistler Blackcomb announced that they are replacing the old whistler village gondola cars, here’s the story from Whistlerblackcomb.com website… 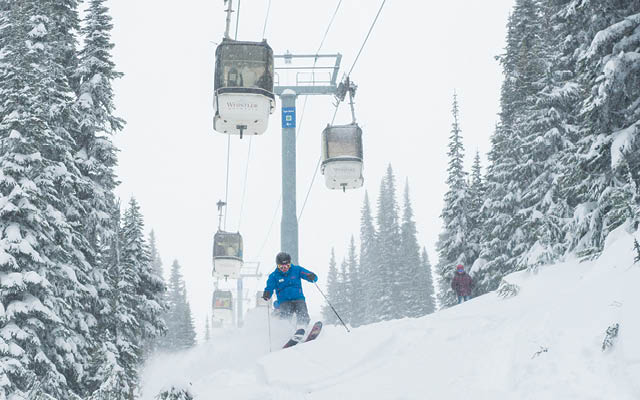 “The original cabins have been loading our guests onto Whistler Mountain since 1988,” says Dave Brownlie, President and Chief Operating Officer at Whistler Blackcomb. “These sleek new cabins are set to dramatically improve the experience for skiers, snowboarders and sightseers. Eight passengers will be able to sit comfortably with their gear in outside racks, and the new configuration is set to improve capacity for the Whistler Village Gondola by 12 per cent through four additional cabins and greater loading efficiency.”

The gondola will operate all summer with the original cabins before closing this fall for a four-week period during September and October 2014 to install the new cabins for the winter 2014.2015 season. The lift terminals for the Whistler Village Gondola at the base, at the “mid” Olympic Station and at the top Roundhouse Lodge will also see improvements to enhance the functionality of the interior space as well as the terminal appearance.

An additional $5.9 million will also be allocated to information technology initiatives, including a new enterprise resource planning (“ERP”) system and radio-frequency identification (“RFID”) system with lift access control gates on most mountain lifts.

“The RFID gates should reduce wait times at our main access points and provide us with the necessary infrastructure to enhance guest engagement in the future,” says Brownlie. “Minimizing lost revenue from lift ticket fraud is also another key benefit of the RFID system.”

If you’ve spent any time in Whistler you know that there have been several gondolas over the years. The original Creekside gondola cabins remind me of old aluminum aircraft, but back in the day they were considered modern.

www.cbc.ca/…/whistler-peak-2-peak-base–jump-leads-to-woman-s-arrest…
19 hours ago – RCMP have arrested a 23-year-old woman who allegedly accompanied a man who BASE jumped from the Peak 2 Peak Gondola in Whistler,

In a statement issued Wednesday, a representative of Whistler Blackcomb said the man entered the gondola at around 3:45 p.m. PT before jumping 436 metres from the moving cabin at the highest point above Fitzsimmons Creek.

Judging from the video, it appears the man landed safely, but despite an extensive search by a Whistler Blackcomb mountain patroller and RCMP at the time, and the ongoing police investigation, he has still not been located.

The statement added that it is believed the man used brute force to open the gondola doors and damaged the opening and locking systems, which are designed to prevent the doors opening on their own.

“Whistler Blackcomb takes tampering a lift system very seriously and is working with the RCMP to press charges and recoup damages to the Peak 2 Peak Gondola,” said the statement.

On Thursday, LeClair said although many are impressed with the stunt, it is not funny.

“This is a criminal act where somebody has indiscriminately done serious damage to someone else’s property for selfish short-term gain.”

If you are not sure which area of Whistler is best for renting, grab our Whistler Accommodation Maps & Guide here.